Chuck Johnson reports in Monday's Missoulian (read the article here) that all of the Republican candidates for  governor are claiming that the best way to get Montana's economy growing is to break down the "regulatory barriers" that are holding businesses back and to "fast track" natural resource development.
This is standard Republican fare, of course, and it's designed to resonate with voters who are frightened by the dismal state of the economy and are desperate for solutions. But solutions are not what they're getting from the Republican gubernatorial candidates. They're getting snake oil.
If you want to know what makes employment grow, and then stop growing, it's instructive to compare Montana's job growth between 2000 and 2010  to what was happening in the rest of the country.  The chart below depicts the growth over this period of all jobs in the US (in blue) and Montana (in green). It also shows the growth of Montana natural resource jobs (in red). All the job figures are expressed as percentages of their 2000 values.* 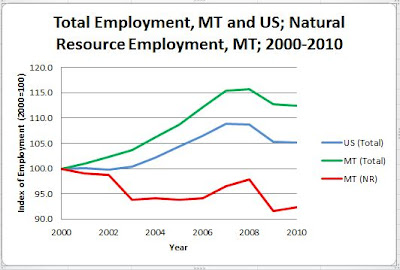 What the chart shows is that for the nation as a whole, employment dipped a bit in the relatively mild recession of 2001, but then grew steadily until 2007. In 2008, with the onset of the Great Recession, it fell sharply. Over this same period, the Montana economy did quite a bit better. Our job growth was significantly faster than the rest of the country's, and we avoided the 2001 downturn completely. Of course with the Great Recession, Montana job growth turned into job loss, but not quite as badly as it did elsewhere in the country.
Now here's the question: between 2000 and 2007, were Montana businesses growing so fast because they were free of  oppressive government regulation? In 2007 did regulatory barriers suddenly leap up and ensnare them? Well, of course not. Before 2007, Montana businesses showed that they could function very well indeed in a regulatory, tax and business environment very much like the one they have right now.  What changed in 2007, and led to the reversal of job growth, was not any change in the regulatory environment. It was the collapse of the US economy, on which the health of Montana's economy heavily depends. And if candidates tell you that by scrapping regulations (and presumably all the protections those regulations provide) they can reverse the effects of the biggest economic downturn since the Great Depression, run the other way.
What about the other element in the Republican formula: natural resources? It's a long story, but it's pretty clear that before 2007, Montana enjoyed rapid job growth despite the fact that employment in natural resources (agriculture, forest and wood products, mining, and primary metal products) was, at best, stagnant. My former colleague at UM, economist Tom Power, has said that counting on natural resources to drive economic growth is like trying to drive a car looking in the rear view mirror.  It's thinking that what worked in the past will work in the future. It's time to look through the windshield.  There's a changing world out there presenting us with new opportunities. Those were the opportunities Montanans seized to create job growth and economic vitality before the recession. When are the Republican candidates who want to be governor of Montana going to understand that?

* I prepared this chart using data from the US Department of Commerce, Bureau of Economic Analysis, Regional Economic Accounts. You can download this and lots of other data from this source by clicking here.
Posted by Dick Barrett at 10:23 PM No comments:

Four years ago politicians, notably Barack Obama and John McCain, were talking about climate change and the imperative to do something about it. But that's all over now. Congress, after a few failed attempts at legislation, is no longer interested. The President, in repeated speeches devoted to energy, barely mentions it. The  recession and jobs, health care reform, Tea Party lunacy and good old fashioned denial seem to have driven climate change not just off the front burner, but off the back of the stove.


Maybe that's why when the EPA this week proposed new standards to regulate carbon emissions from electrical generating plants, the reaction was, at best, muted. On the other hand, maybe it's because the regulations, at least at this point, really won't have much of an impact on either the economy or the climate.


The EPA is proposing a standard which would apply only to new gas or coal fired power plants, and would cap their carbon dioxide emissions at 1000 pounds per megawatt-hour of electricity produced (you can read the 257 page proposal here) . That's a standard that efficient modern natural gas generating plants can meet, but coal fired plants, which emit almost double that amount, cannot. It may be that some day the industry will figure out how to capture and store carbon dioxide from coal fired plants securely and at reasonable cost, but that day doesn't appear to be coming any time soon. So for the foreseeable future, the EPA standard means that new generating units will burn gas, and not coal. Well, that's something, isn't it?  (Sort of) clean gas instead of dirty coal?


Well maybe, but the fact is that gas was becoming the fuel of choice long before the EPA proposed the new standard. Gas is currently abundant and cheap, the cost of  building gas fired plants is relatively low and coal simply can't compete. Indeed, according to EPA, no new conventional coal fired plants are being proposed anywhere in the United States. So the EPA standard simply locks in what would have happened anyway. Coal and gas production, energy jobs and prices, emissions - all those things - will do pretty much what they would have done anyway.


And speaking of emissions, what does all this have to do with climate change?  Producing more electricity with fossil fuels means increasing carbon emissions. That fact in inescapable. Using gas rather than coal means that emissions will grow more slowly that they otherwise would, but they will still grow. The hitch is that to halt climate change, emissions need to fall - not just to grow more slowly, but to fall.  We can use natural gas to make that happen only if new gas fired plants displace existing coal plants. Indeed, a rough calculation is that just to hold emissions at their current level,  for every one megawatt increase in generating capacity we need, we'd  have to build two new megawatts of capacity that are gas fired and retire one that's coal fired.


For the moment, however, nobody is talking about wholesale retirement of working coal fired power plants. These plants, which produce about 40% of all US carbon emissions, are not covered under the EPA proposal. Taking on existing coal fired plants is the next big step for EPA, but not one it seems inclined to take anytime soon. Right after she announced the new standard last week, EPA chief Lisa Jackson assured the press that "We have no plans to address existing plants and in the future, if we were to propose a standard, it would be informed by an extensive public process with all the stakeholders involved.”


And that, when it comes to climate change, sounds like business as usual.
Posted by Dick Barrett at 3:11 PM No comments:

Dick Barrett
Missoula, MT
I am a retired professor of economics at the University of Montana now serving in the Montana legislature representing Senate District 45. I use this blog to provide personal commentaries on political, social and economic issues of interest to Montanans. If you find these commentaries of interest in understanding the issues, check back. I will post frequently.