One of the favorite tropes of my Republican colleagues in the Montana legislature is that the Obama administration, working through the nefarious EPA, is waging a “War on Coal.”   Dealing with this rhetoric, which I have done in previous posts, is getting a little tedious, but Sen. Fred Thomas’ most recent broadside in this so-called war is so absurdly ill-founded that it really requires a response.

In a recent column in the Missoulian, Thomas goes after the EPA’s carbon emission standards for new coal fired power plants. Among other things, he claims that the EPA, evidently in cahoots with unnamed environmental groups, has imposed these standards to “end coal development.” The result, he claims, will be that no new coal fired power plants will be built, resulting in the loss of “hundreds of thousands of jobs supported by the American coal industry.” The price Americans pay for electricity will go through the roof. The diversity of our energy supply portfolio will decline. And there will be an “immediate cessation” in the development of new carbon emission technology by an industry that has achieved “dramatic reductions” in pollution without goading from the EPA

It’s hard to know where to begin with this muddle, but let’s give it a try.

As has been noted over and over again, and despite what Thomas thinks, the EPA’s new source carbon standards are not going to block the construction of new coal fired power plants, for one simple reason: even without the standards, nobody is planning to build such plants anyway. Look at the figure below, which is taken from a US Energy Information Administration forecast of where new generating capacity is going to come from for the next 25 years. The little black bars, which can hardly claw their way above the horizontal axis, represent coal’s contribution to that new capacity.  Over the whole period, coal accounts for only three percent of the total, leaving almost all of new electrical generating capacity to come from natural gas and renewables. 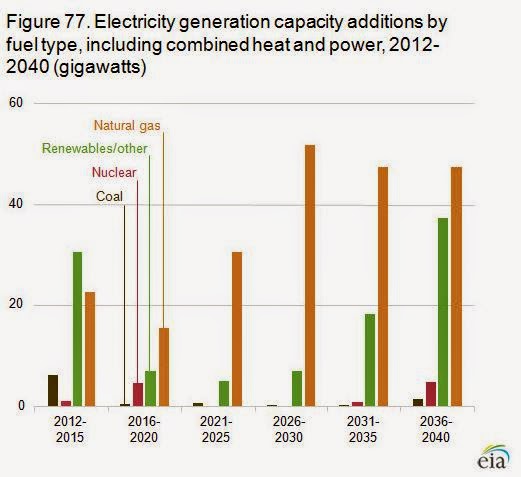 Since the EPA standards can’t stop new coal fired power plants from being built if they weren’t going to be built in the first place, the obvious corollary is that the standards are not going to destroy “hundreds of thousands” of coal supported jobs. Of course even if the standards were to prevent new plants from being developed, the effect would simply be to slow the growth of coal supported jobs, not to destroy the jobs that are already in place. So even in the worst case, “hundreds of thousands” of coal supported jobs have never been in jeopardy from the EPA regulations, and Thomas should know that.

The same thing goes for the trajectory of electricity prices. How these prices behave in the future is going to depend on how fast the supply of energy grows relative to the growth of demand. Look at the figure again. Coal is not expected to contribute in any significant way to new generating capacity, and that means the EPA standards will have nothing to do with how fast supply is going to grow. The standards therefore cannot produce the electricity price spikes that Thomas wants you to be alarmed by, nor can they hasten the decline in coal’s market share (not that that means what the senator thinks it does*).

Thomas is right about one thing: there is a war going on here. But it’s a war on climate change, not coal, and frankly, it’s off to a pretty lame start. The EPA new source standards aren’t going to deflect emissions from whatever rising path they are on, let alone reduce them. But make no mistake about it: if the war on climate change ever gets serious, carbon emissions are going to have to go down (slowing emissions growth will not be enough) and that means that short of a technological miracle we are going to have to reduce the amount of coal we dig up and burn. That’s a tough fact for Montana politicians to swallow, but let’s face it: we can talk all we want about “responsible resource development” or how “coal is always going to be a part of our energy future” or “hundreds of thousands of coal jobs,” but if we are serious about arresting climate change, we can't have it both ways. We're going to have to fish or cut bait.

None of this means we should shut down coal, declare victory and go home. It can't be done and it won't work.  And largely empty gestures like the EPA new source standards are not going to get us where we want to be. The efficient path to reducing emissions is going to involve a lot more than that: more renewables, less oil as well as less coal, more energy conservation and efficiency and possibly carbon sequestration.  What we should dread is that we will never start down than path in the first place. Or that when we do, it will already be too late.

* Thomas believes that when coal’s market share declines we lose diversity in the energy supply portfolio. How does that work? Coal is by far the largest single source of energy in the electricity supply portfolio. As it is displaced by other energy sources such as wind or natural gas, it loses market share, we become less dependent on a single source for our energy, and we have a broader set of alternative sources to choose from. That amounts to greater diversity, not less.
Posted by Dick Barrett at 5:55 PM 3 comments: 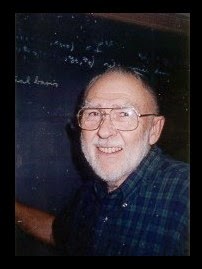 There's an obituary in today's Missoulian for Bill Ballard, who was a professor of mathematics at UM, a real progressive his entire life, a true union man, and a stalwart of the University Teachers Union throughout the 1970s and 1980s, up until the time he retired. He was 88 when he died, and was of the generation of guys like Howard Reinhardt, Arnie Silverman, Ron Perrin, Mike Chessin, John Lawry and many more, who made up the liberal old guard at UM when I arrived in 1970. Of course they were younger back then, but still, they were the repository of wisdom and common sense and a steadying voice when we needed it as we went through two representation elections, negotiated the first contract, and dealt with retrenchments and the other trials and tribulations of making the UTU more than a "marching and chowder club," as one AFT national rep once put it.
There are a dwindling number of people around who knew and worked with those guys, and I suppose that someday they will all be forgotten. But for today, remember Bill. He was a very quiet man, very serious and thoughtful, who could bring you back down to earth with a sensible and pointed question or observation. His presence in the union leadership was critical but not highly visible. I was always glad he was around. He was small physically, but one of those giants whose shoulders we stand on.
Posted by Dick Barrett at 11:00 AM 1 comment:

In response to my post regarding Charter Communications tax-cut-by-initiative scheme, Rep. Mike Miller comments via Twitter, “It seems the taxpayer is screwed either way via either higher taxes or higher cable bills.”   Mike has a point, but I think it’s a little more complicated than he thinks it is, and since I can’t explain myself in 140 characters, I’ll make a few points here.

Mike seems to be saying that Charter will be able to pass on to its subscribers all of the tax increase it’s looking at, and of course Charter wants you to think that too. But it’s unlikely. Who will actually end up paying the taxes – subscribers, employees, suppliers, owners – is a puzzle that economists love to play with, but suffice it to say that economic analysis tells us that it is unlikely to be just the subscribers. Some of the taxes are going to come out of Charter’s bottom line. If Charter could easily and painlessly shift the taxes onto its customers, why would it be making all this effort to engineer a tax cut for itself?

Another thing: not all taxpayers are Charter customers.  For those who aren’t, Charter’s gambit, if successful, will mean all pain and no gain.

And finally: if Charter succeeds in offloading its taxes onto everybody else, the impact on individual taxpayers is going to vary widely; some taxpayers are going to see their taxes go up more than their cable bill goes down (remember, we don’t really know how much that will be and it's zero for folks who don’t have cable) and others will see their cable bill drop more than their tax bill goes up. Cable customers receiving services from Charter have to expect to pay some of the company’s taxes. But why the taxpayers in general should foot the bill is a mystery to me.
Posted by Dick Barrett at 10:34 AM No comments:

Dick Barrett
Missoula, MT
I am a retired professor of economics at the University of Montana now serving in the Montana legislature representing Senate District 45. I use this blog to provide personal commentaries on political, social and economic issues of interest to Montanans. If you find these commentaries of interest in understanding the issues, check back. I will post frequently.